Every summer my husband and I seem to need to have at least 1 home-made blueberry pies or we feel like we missed something. The problem is that it’s too hot to want to turn on the oven! I’m also still experimenting with gluten-free crusts, which sometimes feels like a lot of work. 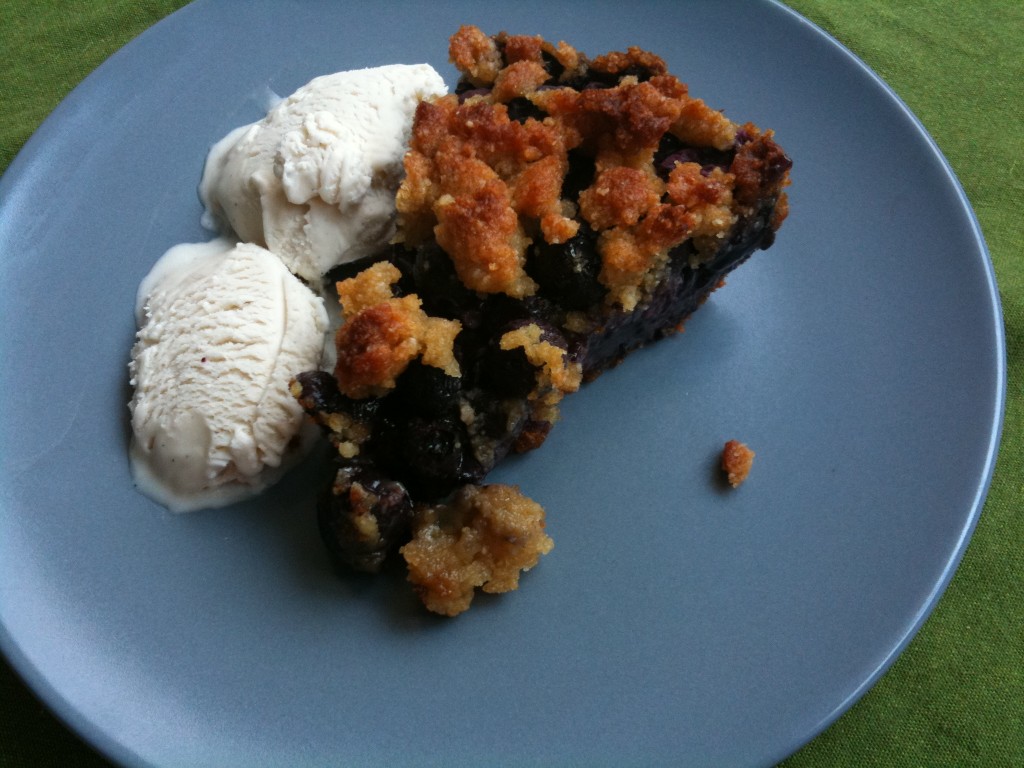 So, because of the heat and the gluten-free challenge, we haven’t had a blueberry pie in 2 years!

I’m taking the week (mostly) off of work to have a mini-vacation while I take the morning intensives in the South Boston Yoga teacher training program. I’m having a great time!

Monday I finally got over the heat/challenge thing and made this superb blueberry pie with almond crust. I found a recipe at Elana’s Pantry for this nice almond-flour crust. Since Elana’s instructions said to pat the crust into the pan rather than roll it out, I knew it would have a crumbly consistency. I decided to double the recipe and use 1/2 of it as a crumble topping, which I added in the last 15 minutes or so of baking.

Make sure you have vanilla ice cream on hand–the first bite makes it clear that you must have it a la mode! I love either Purely Decadent or Cocobliss‘s vanilla coconut milk ice cream for this.

The crust is not as cohesive as a wheat-based crust, but it crumbles charmingly and tastes delicious.

For the crust and crumble (see Elana’s original posting here):

To make crust and crumble:

Press 1/2 of the almond mixture into a pie plate, reserve rest for topping.

Combine tapioca flour, sugar and cinnamon. Gently fold into blueberries, making sure everything is evenly distributed. If you’re using butter, put small pieces here and there on top of the blueberries.

Put blueberries into prepared pie crust and cover tightly with foil with a few small holes punched to let some steam out.

Return pie to oven, uncovered, and bake for 15-20 minutes longer, until crumble topping is nicely browned.