One of our favorite meals is “rice and soup.” It doesn’t sound especially appetizing, I suppose, but it’s our short-hand for a Korean/Japanese-style meal of short-grain white rice, miso soup, and a wildly varying (and often enormous) collection of vegetable and protein side dishes. The variety possible is endless, and many of the side dishes are easy to pull together. As a meal, it’s a bit like tapas. 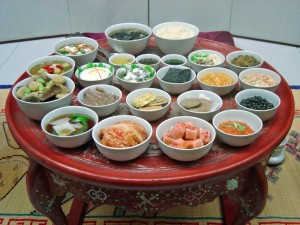 We learned to love these types of meals when we lived in Taegu, S. Korea. In the local parlance, such a meal was called “chung shik” (I think other parts of the country call it “bap shik”). “Chung shik” is a “regular meal.” Most restaurants serve some version of this–a soup, often deon jang jjigae, the Korean version of miso soup, rice, at least one type of kim chi, and a variety of small dishes of vegetables and a bit of protein. Restaurants near temples often specialized in vegetarian fare in recognition of the nearby buddhist monk’s vegetarianism, usually including delicious house-made tofu.

Every time I ate something delicious I would ask anyone who could speak a bit of English how to make it. We bought some English-language Korean cookbooks while we were there, but they’re only so-so.

So, I’m super excited about two new Korean food blogs I’ve found, Bap Story and Mangchi. They have great recipes and pictorial or video instructions on how to make them.

Our “rice and soup” dinners are better than ever now!